Last Sunday, February 10th, Father Mike talked about conversion. With the Gospel being about the Apostles catching more fish than they had expected, he used the letters of the word “FISH” as a very suitable acronym for conversion, meaning Fascination, Invitation, Sense of Unworthiness, and Humble Submission.

My friend, JC, who is a fellow servant in the Feast Mall of Asia Music Ministry, recently shared his own FISH story and posted it online. His story inspired me to write my own.

I first heard about the Feast from my mentor, whom I fondly call Mommy Val. She had mentioned it quite a few times that she attended the Feast on Sundays, saying once that when she brought her daughter (who was my age), the talk was very appropriate for her. I was intrigued, but back then I was more than content having my Sundays to myself. Yet, part of me was curious about the talks because Mommy Val mentioned Bro Bo Sanchez quite a few times during our training’s lecture time with my fellow dance scholars every Saturday.

I was all set to have an entire 4-day weekend to myself for Holy Week of 2014. Then a couple of weeks prior, Mommy Val invited us scholars to Bo Sanchez’s Holy Week Retreat. Only 5 of us showed interest. We spent the Holy Week like an actual retreat, with just 5 of us staying in one house, and then we joined Mommy Val and her family in PICC in the mornings for the retreat. My first Feast was huge, because it was the Grand Easter Feast. I was enamored by the talks and the worship. Watching the worship team sing with such passion, I was inspired, and I told myself that someday, I will be where they were standing.

Even after I left my position with the scholars, I continued going to the Feast. I didn’t care even if I went alone. I realized that the talks were things I needed to hear, when I was quite used to hearing only things I merely wanted to hear. I was helping myself by still bringing myself to the Feast every Sunday, even though I was at my low points. Ever since I changed paths in 2015, I felt as if I had no direction, so I kept going to the Feast and there I would feel refreshed and inspired. Whenever I felt lost, it seemed as if the talks pushed the right buttons.

After my somewhat random beginning as a servant-actor back in 2015, I am still serving, now as part of the music ministry, mostly with the Feast Mall of Asia Chorus. My growth in the ministry had been quite challenging, because looking back, I knew that one of my first objectives to serve in the music ministry was out of mere vanity when I was starting out. I gradually realized that everything happens in its own time, and things may not turn out as I had expected. I had not been elevated as expected when the opportunity came 2 years ago. He gave me an even bigger task--to learn how to lead, and to learn how to make new leaders as well within our ministry. And hey, as it turns out, God had a different reason to put me up on that huge stage that I was looking at during the Grand Easter Feast 2014. It had come full circle when it was also for the Holy Week Retreat, not only once, but twice (hello, Mary Magdalene 2017 and Mother Mary 2018). 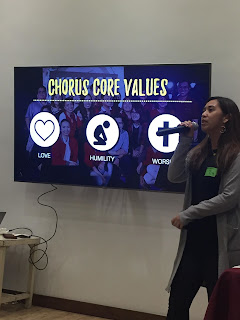 So, what’s your FISH story?
Posted by Christine Cadlum at 3:58 PM