On Lent, changes, and challenges.

I can’t count how many times I’ve tried to write this, and then find myself staring into space. I still have no idea how to start this entry, let alone write it.


This entire Lent had been quite the trying time for me. There were quite a few changes, plus some challenges that sometimes left me in tears. Yet, I still tried to look for the little good things in everyday, no matter crummy most days were.

The first major change that happened was at the very beginning of March, when I had to move from Las Pinas to Makati because of necessity. I work in Ortigas with a shift that begins at 5:00 in morning, and the commute can be quite a challenge. Fortunately, a close friend offered a house to share.

It was all different and new to me, learning how to live independently for the first time, along with a friend in close contact with all the time. It brought challenges outside our friendship, because I already knew from the beginning that people will talk. There were also challenges within our friendship, which I have been dealing with for quite some time now. We live, but we learn.

Speaking of learning, I learned that being a good leader has so many ups and downs. I love it when we share our successes. But it's still tough when you feel as if your leadership and your commitment is being questioned. I started asking myself if I was still effective as a leader. I somewhat crashed, because there were already a lot of challenges that were going on in my life that time, and this also came into the picture. But again, we learn to communicate, and more importantly, we still learn.

Another change this Lent was in terms of relationships. When a given circumstance changes, sure enough, a lot of things will change as well. When a close relationship gets distorted, it can lead to a lot of repercussions. Certain situations can either draw two people even closer together, or it may even push them further apart.

I just didn’t realize that it’s possible that both can happen in quite a short time.

Because of the new circumstances, we take necessary actions. And sometimes, or even usually, the actions leading to a brand new setup and situation is not in our favor.

I was assured that this would only be temporary. Because of that assurance, I ended up being more clingy, needy, and impatient, that sometimes I become less sensitive that the other party may also be going through other things apart from what had happened between us. I had learned that not everything is about me.

I know there are easy and quick ways around this, but being quite the persistent (or maybe stubborn) person, I am still determined to see this through. There had been a lot of setbacks and arguments along the way, but I am slowly adjusting, little by little.

I was also reminded by a friend that this is not the time to overthink things. “Binigay sayo yung oras na yan para ayusin mo yung sa sarili mo. Hindi para ayusin yung sa inyo. Use it wisely."

The timing was perfect, because I got called to serve as an actor for the third year in a row at the Holy Week Retreat. I was given the role of Mary Magdalene, which was the same role I had when I first served in 2017. I was so surprised, that despite all of the challenges and changes that I had been going through since Lent began, God gave me this huge opportunity to serve Him again through my core gift. Upon receiving the monologue, I found myself in tears not just because of how much emotion the piece had, but because of the possible reasons why God had given me all this, both the opportunities and the challenges.

I was still so hung up on my personal concerns that sometimes, I didn’t focus much on service. It came to the point that I thought I had already memorized my monologue, but once I got up onstage on the day of rehearsal, no word would stick. Anxiety kicked in, especially because I had promised that I would have this memorized. So I ended up spending most of the night before my Easter performance memorizing and rehearsing. I had to stop overthinking and I had to focus. And trust in Him.

He never left my side. Even during the times when I was running the piece in my head and kept tearing up because of the extreme emotions, He was there.

On the day of the Grand Easter Feast, He left me with a message, through the Word that Bene had shared backstage before our prayer before service. It was exactly about the monologue I was about to perform, when Mary Magdalene went to the tomb and found that Jesus’ body had disappeared. Bene had described that Mary held the linen that was used to wrap Jesus’ body, and was clinging on to it. I felt goosebumps when he said the word “cling”, because that was my super objective (yes, I’m getting technical in terms of script analysis). Bene went on to say that Mary was clinging to the “fact” that someone might have took Jesus’ body. She was clinging on to that fact that Jesus was dead, that she didn’t recognize Jesus when He appeared to her, and mistook Him for the gardener. 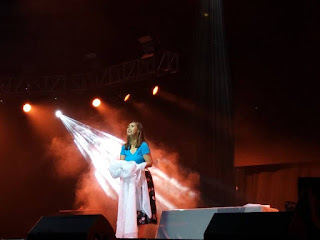 Mary was clinging on to past graces, not letting them go. Because of that, she couldn’t accept the new graces, one of which was the fact that Jesus had risen and is alive.

I was clinging on to a reality that I was so used to. I was used to this specific circumstance, that I didn’t know how to accept how things should be now.

At the end of the monologue, from mourning to joy, Mary shouts that Jesus is alive, throwing the linen up in the air, letting it go.

That is something that I still have yet to learn now, to let go of the past graces, and to restart.

Little by little, I’ll get there.

This entire Lenten season was a season of changes, challenges, and lessons.

I just need to see all of this through.

And in time, I will be okay. 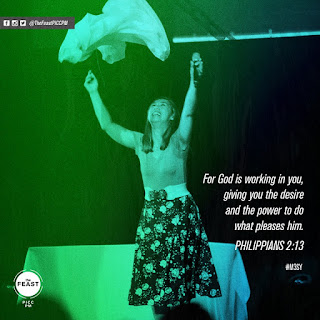 Posted by Christine Cadlum at 11:13 PM